Kenya Law / Blog / Speeches: The Chief Justice’s Address to the Nation on the Judiciary and Election Preparations 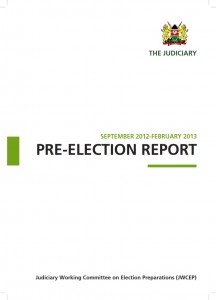 By a happy coincidence, today is the fifth anniversary of the signing of the National Accord and Reconciliation Agreement, which ended the crisis that followed the 2007 elections.

As we approach another election next week, it is a fitting time to review  the  steps  the  Judiciary  has  taken  to  address  the  severe doubts about its independence and credibility that significantly contributed to the crisis five years ago. The country deserves to know how prepared we are. And without equivocation, I can confidently proclaim that  the  entire Judiciary of  the  Republic of Kenya is ready. From the Magistracy to the High Court, the Court of Appeal and the Supreme Court let the country know that we are fully prepared and organised to deal with any number and manner of disputes that may arise from these elections in an independent, non-partisan, and efficient way.

In 2007, public confidence in the Judiciary was just under 30 per cent. Now it is much higher. We have earned public trust not by our proclamations but by our deed and conduct. We have reclaimed public confidence by the way we have handled our constitutional mandate — firmly, fairly, impartially, speedily — paying heed to the political, economic and social realities of the country but without surrendering our duty to protect, uphold and defend the Constitution as the solemn codification of a people’s legitimate aspirations.  And   we   are   not   about   to   betray   this   trust   and confidence.

Since   the   promulgation   of   the   Constitution,   we   have   taken deliberate steps to win back public confidence. The Judiciary has been  the  first  arm  of  government  to  be  held  up  to  the  high standards set for public officers. We have undertaken the most far- reaching cleanup of our systems and processes — from vetting to transparent hiring of judicial officers. We have re-oriented our institution towards service, adopted a culture of open public accountability, and invested in case management efficiency.

We thank the public for the increasing confidence it has continued to show in our abilities, as evidenced by the numerous cases filed in the courts touching on various aspects of the electoral process. We do not take this vote of confidence lightly or even for granted. We believe that such confidence extends to the ability of the Judiciary to handle any disputes that may arise after the elections. Let me reiterate that we shall exercise the power you have vested in us independently, and we shall maintain a meticulous fidelity to the law and the Constitution that you have entrusted us to interpret and uphold.

On election-related matters alone, the results are there for all to see: 136 delimitation of boundaries cases heard and finalised in one month; the election date case heard and determined in record time; all integrity cases heard and decided; 47 cases arising from party nominations heard and decided in just five days. To the new Judiciary, no case is too difficult or delicate to determine. No number of cases is too high to dispose of efficiently and competently.

Allow me to congratulate the judges, magistrates and other officers in  the  Judiciary who  have  worked tirelessly in  the  past  year  to ensure that the electoral process in Kenya runs smoothly.   Many have literally put in countless hours and burnt the midnight oil to adjudicate on disputes surrounding these elections. The Judiciary is commanded by the Constitution to ensure access to and expeditious delivery of justice. It is a command we have embraced as part of the Judiciary transformation journey – so never again shall we be seen as the bottleneck to electoral justice that nudges the country towards violence.

We have looked into the future and laid the best possible plans to deal with any eventualities the elections may throw our way. The Judiciary Working Committee on Election Preparations, which I appointed in May 2012, has done an excellent job and I want to thank them. Through its efforts and great foresight, we have trained ALL judges and ALL magistrates throughout the country on how to speedily and justly resolve election disputes. Under the aegis of the committee,  the  Judiciary  has  done  sufficient  ground  work  to prepare  effectively  for  the  elections.  The  launch  of  their  report today,  detailing  their  work  since  September  last  year,  serves  to show how seriously the Judiciary is taking these elections.

As  part  of  our  preparations,  we  have  initiated  a  number  of measures: we have had the law amended to give Magistrates jurisdiction   over   county   assembly   election   disputes   to   avoid clogging up the High Court and delaying justice. We have published both the  Supreme Court Rules on  Presidential Petitions and  the High Court Petition Rules for the other electoral offices. These Rules have been developed in a consultative process involving the Law Society of Kenya, Political Parties, and the Independent Electoral and Boundaries Commission (IEBC).

I have cancelled all leave for judicial officers between March and October. All judges and magistrates will work through vacation periods and, if necessary, will sit on Saturdays, Sundays and Public Holidays. Further, all Court Registries will remain open from 7 am to  6  pm;  but  these  hours  may  be  extended  depending  on  the number of petitions received.

The Judiciary now has 114 judges and 436 magistrates. Each station will  have  a  judicial officer  on  call  day  and  night  to  try  election offences and hear disputes. Electoral disputes require rapid resolution because they relate to the access and use of power and have an overwhelming public interest element.

We have closed off opportunities for those who might be tempted to abuse the courts. Through pre-trial conferencing, reference to mediation and efficient case management, I want to give an undertaking to the country that we shall meet the constitutional deadlines of resolving all presidential election disputes within 14 days and all other election petitions within six months – if and when they arise.

Ultimately, we all have to remember this: the election is a constitutional and legal process. It cannot be performed outside the Constitution or the law. It is only by upholding the rule of law that the exercise of the rights guaranteed each of us by the Constitution can be secured. In it, there is no space for violence, fraud, bribery, intimidation or hate. Our duty as a Judiciary is to uphold, promote and protect the Constitution. It is a duty that each of us has sworn to perform, and we do not take it lightly — not for a moment.

Fellow Kenyans when you see us speak and pronounce ourselves robustly on issues, it is because we need to assert our independence as part of our transformation. Our democracy and the rule of law in this country were imperilled by a Judiciary that was too timid, too partisan, and too weak to stand up both for people and institutional rights. An independent Judiciary is, individually and collectively, in the service of the public interest. We have consistently maintained our independence in the exercise of our judicial powers and discharge of our administrative duties. From the election date matter, to the integrity cases, to swearing in of state officers, to regular defence of the Judiciary our political impartiality and evenness has not been in doubt. It is this impartiality, firmness, and fidelity to the Constitution that we shall exhibit in managing elections disputes – including the presidential ones.

But we also know that independence is not isolation. The Judiciary has been working with other arms of government and will continue to do so. This is why Parliament passed our proposed amendments to give jurisdiction to magistrates. This is why, as the Chair of the National Council on the Administration of Justice — on which sits the Head of Public Service, the Inspector General of Police, the Attorney General, and the Director of Public Prosecutions — I have held special meetings on election preparations at which we have agreed on a common course of action. It is why the Judiciary has been participating in the Assumption of Office Committee meetings to prepare for the swearing in of the president Kenyans will elect. It is the reason I  have appointed 47 judges and 47 magistrates to preside over the swearing in of County Governors and Assembly Members. Robust independence and constructive interdependence is the principle that undergirds our relationship with other organs of State.

There is a time in a nation’s history when all its institutions are united in the pursuit of a single goal. This is such a time. These elections will usher in a new governance structure not experienced before by Kenyans. It is, therefore, a time for all our national institutions,  beginning  with  the  Judiciary,  but  encompassing the Executive, and in particular the IEBC, to work in full harmony to ensure the elections are carried out in the most efficient, fair, and credible manner, and that any arising disputes are expeditiously and judiciously dealt with.

The people of Kenya have a high regard and esteem for the transformed Judiciary, and have put their trust in it, to not only ensure that election disputes are dealt with promptly but also to ensure the transition from the outgoing to the incoming administration is smooth and peaceful. We at the Judiciary are fully aware of this enormous responsibility, and we are fully prepared to discharge it in an impartial manner. We do not hold on to or belong to any partisan agenda or ideology. We are above any form of bias, committed to discharging our duties in the most equitable and impartial manner. We  will  uphold the  spirit  of  the  law  and  the Constitution to the letter. We will discharge our mandate in the most transparent and accountable manner so that every Kenyan can  reaffirm their confidence in  the  Judiciary at  the  end of  this election period.

Fellow Kenyans, this  is  the  Constitution you  voted  for.  It  is  the Constitution that the judges you see here today, and myself as Chief Justice, swore to uphold without fear, favour or bias. Compatriots, seated here today are all the High Court judges in  the Republic whom you recruited, vetted and found suitable to serve. Each one of them understands the legal and moral meaning of the oath they took. Each of these distinguished ladies and gentlemen understands the public interest at stake. In this  Constitution, that of these judges and that of the office of the Chief Justice I appeal to you to have faith and confidence that we shall act fairly, firmly, efficiently and impartiality in the discharge of our judicial and administrative duties.