Kenya Law showcased its products and services at the Nairobi International Trade Fair, which was held on 29th September to 5th October 2014 at the Jamuhuri Park ground.

Nairobi International Trade Fair is the largest Trade Fair in Kenya and the East African Region.   This is a seven-day event that attracts members of the public from all walks of life and as such offered a wonderful opportunity for Kenya Law to present its latest publications and services.

Kenya law staff members were able to give guidance on the various aspects of law reporting and compilation of laws. Complimentary copies of the constitution were also offered to members of the Public who visited the stand. On the overall the Public was also educated on who Kenya Law is and its Mandate.

Members from the Legal Fraternity found the New Kenya Law Mobile Application very innovative and a good number had it installed on their android powered mobile devices. 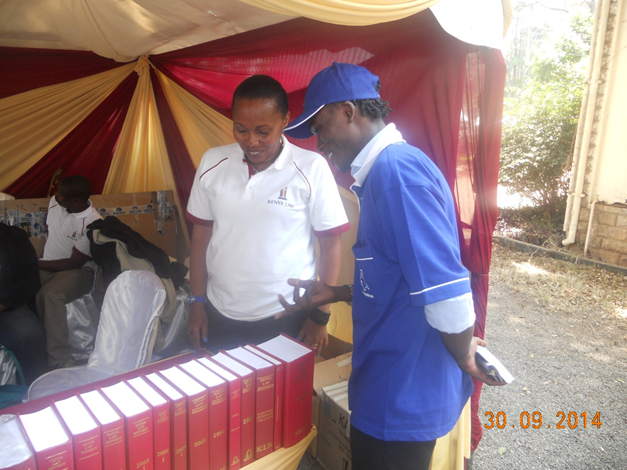 Kenya Law’s Eva Murage chats with a Member of the public during Nairobi International Trade Fair held from 29th September to 5th October 2014 at the Jamuhuri Park grounds.