Kenya Law was crowned the 2014 “LSK PLATE” winners at the 16th Edition of the Annual Justice Cup after beating Dally & Figgis Advocates 5-3 through penalties. The tournament which took place at the Parklands Sports Club on the 26TH July, 2014 attracted a total of 39 teams from the legal fraternity, NGOs, Media Houses & private firms.

Kenya Law was in the Blue pitch group which had 6 teams. They started well in the preliminaries by beating the Office of the Directorate of Public Prosecution (O.D.P.P) 5-0 and conceding no goals in all the other matches.

Kenya Law finished 4th in the Preliminaries with 6 points and qualified for “LSK PLATE” Competition. At the LSK PLATE Quarters, Kenya Law won through penalty shoot-outs after they drew with Hamilton Harrison & Mathews. At the Semis, Kenya law thrashed Wamae & Allen Co. Advocates.

The overall tournament winner was Kenya School of Law who took the coveted Justice Cup. 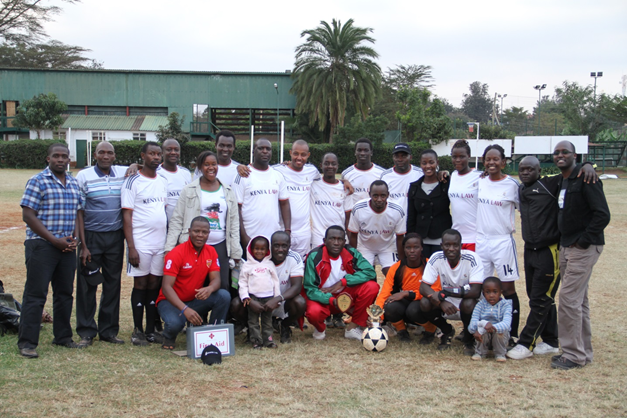 The Kenya Law team during the 16th edition of the Annual Justice Cup held at Parklands Sports Club on t 26th July, 2014.