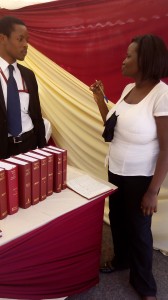 Kipkemoi Sang (left), a pupil at Kenya Law listens keenly to a visitor at the Kenya Law stand during the LSK Annual Legal awareness week.

The balance between national cohesion and legal aid was underscored during this year’s Legal Awareness week.

The theme was “Fostering National Cohesion through Legal Aid” participants were enlightened on legal literacy.

The Hon. Justice Richard Mwongo, Principal Judge, High Court of Kenya in his opening remarks noted that: “The short answer to Legal Aid and National Cohesion is that a balance of justice is assured through provision of legal aid; and the elements of human rights inherent in legal aid underpin and preserve cohesion within the community.”

It is for this reason that Kenya Law, which has been participating in the LSK Legal Awareness week worked diligently to ensure the public was made aware of the law. This was made possible through the display of our publications among them the Grey Book 2014 Revised Edition and the recently published Kenya Law Reports 2011 Vol. 2, KLR 2007 Vol. 1, KLR Elections Petitions Vol.5, Kenya Law Review (2012-2013). Members of the public were able to peruse through the publications and got a better chance to see how various cases touching on different issues were decided in the three highest courts. Under the Laws of Kenya, they were able to understand more on what various Laws say with the recently amended Traffic Act being the most popular followed by the Land Laws. The pocket size Constitution of Kenya 2010, published by Kenya Law, was given out to all visitors.

The Kenya Law website (www.kenyalaw.org) was displayed live at our stand and it was encouraging to learn from members of the public of the great role the website has continued to play in providing free legal information online.

The feedback on publications and the website was well received by the staff. The feedback forms a crucial part of service provision as staff are made aware of the strengths and weaknesses. 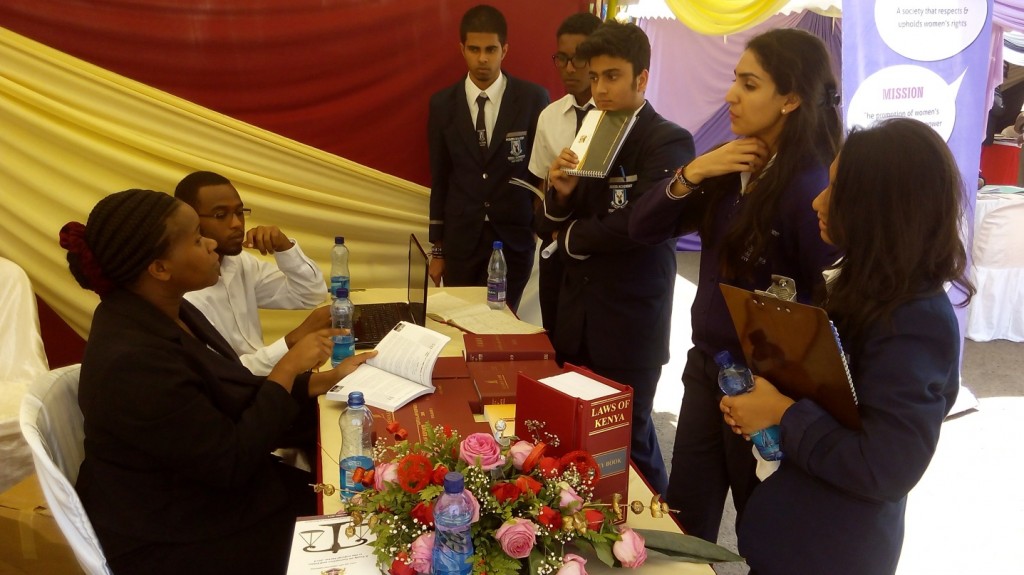 Interaction with other members of staff from different law sectors such as FIDA, ICJ, IPOA, CREAW, KNCHR and Kituo cha Sheria among others was critical in understanding what other such institutions are doing in their scope of work hence creating synergies and a nexus aimed at improving the linkages and strong partnerships. In the spirit of our Mission and Vision, Kenya Law will continue to engage in such forums countrywide in order to have an enlightened society.

The Legal Awareness week ran from September 28 to October 2 at the Milimani Commercial Courts Nairobi.