Kenya Law partnered with Kenyatta University School of Law to realize the   3rd All Kenyan Moot Court Competition (AKMCC) held at their Parklands School of Law Moot court facility on 20th and 21st February 2015. Kenya Law offered the expertise of two senior Law reporters Ms. Linda Awuor and Ms. Njeri Githanga to be judges at the Moot Court. Kenya Law also donated copies of the Supreme Court Case Digest, pocket size constitutions and promised to publish the winning papers from the winners of the competition.

In his opening remarks, Mr. Terer commended the AKMCC secretariat for organizing such an important event and challenged the participants to utilize the opportunity of the moot competition to further develop their advocacy skills. He assured Kenyatta University School of Law of the the continued partnership and support of Kenya Law.

The 2015 competition was themed “The Place Of Refugee rights in the Face of National Security Threats” and hosted more than 17 teams from 8 Law Faculties across Kenya. Strathmore University was crowned the best team.

The AKMCC is an annual national moot court competition hosted by the Kenyatta University School of Law (KUSOL) and involving all Law Schools in Kenya. The competition focuses mainly on contemporary issues of law and is set to become one of the largest annual gatherings in the Kenyan legal calendar. 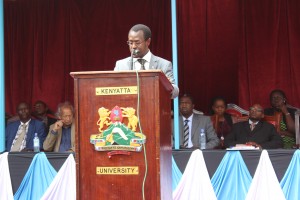 Mr. Long’et Terer, the Ag. CEO Kenya Law gives a speech during the All Kenyan Moot Court Competition held at the Kenyatta University School of Law Parklands on 21st Feb 2015.