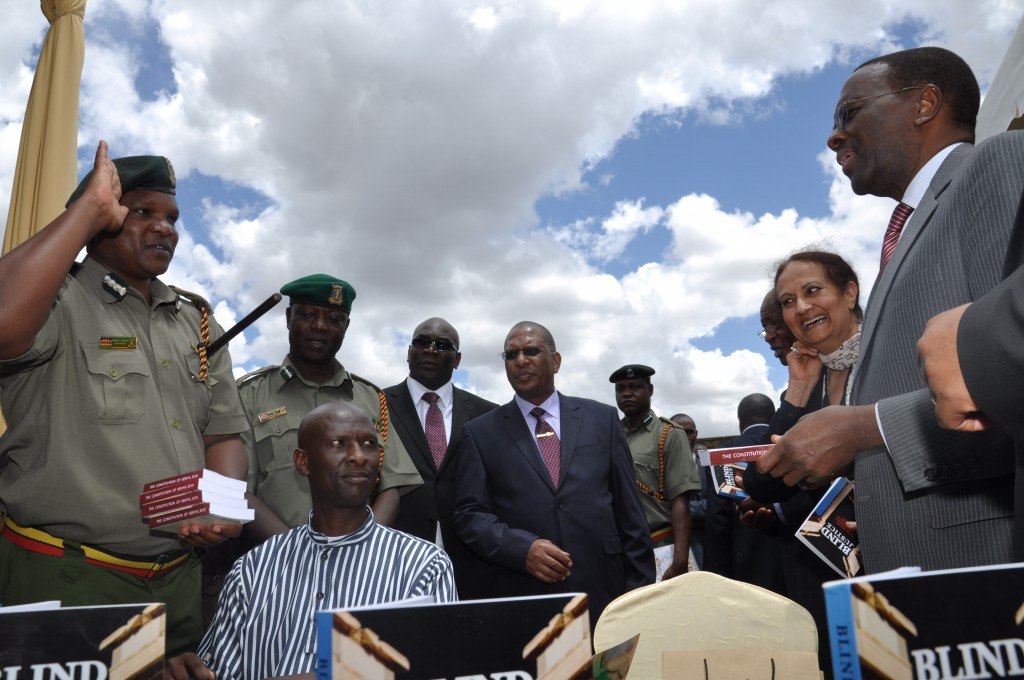 Chief Justice and Chairman of the Council for Law Reporting Dr. Willy Mutunga (right) flanked by the Deputy Chief Justice Kalpana Rawal (second right) hands over copies of the pocket-sized Constitution of Kenya, 2010 published by Kenya Law to officers at the Kamiti Maximum Prison during the Judicial Service Week on October 11, 2013.
Looking on are the Commissioner of Prisons Mr. Isiah Ougo (second left); the Chief of Staff in the Office of the Chief Justice Mr. Duncan Okello (third left) and The Director of Public Prosecutions Mr. Keriako Tobiko (centre).
Seated is Mr. Haron Thomas Nyandoro, an inmate at the prison who launched his book – Blind Justice: The True Story of an Innocent Man Sentenced to Hang, and his Untiring Quest for Justice.

Members of the National Council for the Administration of Justice, including:

The Commissioner of the Prisons Service,

The Inspector-General of the National Police Service,

The Director of Public Prosecutions,

The Department of Probation Services,

Members of the Judicial Service Commission,

Hon. Deputy Chief Justice of the Republic of Kenya

Honourable Judges of the Superior Courts,

Colleagues in the Judiciary

Today’s event is a manifest demonstration of the phenomenal achievements that can be made when institutions work together. Let me begin with a little background.

Last year, judges, magistrates, kadhis and judicial staff stepped out of the courtrooms and onto the streets across the country to explain how they work and receive feedback on how to do their work better. The Judicial Marches Week was unprecedented as an outreach initiative, and it has yielded greater public participation in the Judiciary as decreed by the Constitution.

On October 7, 2013, the Judiciary delivered judgments in the last seven election petitions. The only election matters now pending are appeals in the Court of Appeal and the High Court. As you are aware, the pressure of the elections this year was such that no judge or magistrate was able to take annual leave. Over 190 election petitions were filed across the courts in Kenya – from the magistrates’ courts up to the Supreme Court. This week, High Court judges completed the last of the 118 petitions before them. Magistrates had concluded another 70 petitions before. It is an unprecedented achievement in the country’s history that each judge hearing an average of two election petitions can conclude them and deliver judgment in six months. The judges and magistrates who have made this achievement possible deserve our gratitude and my personal congratulations. I want to acknowledge the hard work of the Judiciary Working Committee on Election Preparations in planning ahead, as well as the judicial officers and staff who worked throughout the year, sacrificing their vacation and leave to deliver on schedule. Your service to your nation is deeply appreciated.

The six-month constitutional deadline for concluding election petitions, now fully discharged, has also introduced another burden on the Judiciary. Criminal appeals that require two judges, or even a single judge, have been held back, causing great frustration for all concerned.

There were 10,289 criminal appeals carried over from last year, and an additional 3,325 filed this year, bringing the total to 13,614. Judges have volunteered to deal with this burgeoning problem through a week of intensive service, hence the Judicial Service Week. I wish to thank the Principal Judge of the High Court as well as all the judges for their sacrifices and dedication. We recognise with deep humility that the Judiciary cannot work alone.

Justice is a chain in which each of the players is as strong as the weakest link. Under the National Council on the Administration of Justice, actors in the justice chain are coming together during the Service Week. I recognize and appreciate the support of the Prisons Service, which is evident by the fact that they have hosted us here, the Probation Department, who have rallied to support the decongestion of prisons, the Director of Public Prosecutions, who has made state counsel available at short notice, and the Law Society of Kenya, who have provided pro bono services and agreed to accommodate the Judiciary for two weeks during the Service Week. I also note and appreciate the technical team representing the various agencies that worked on the preparations for the Service Week.

Starting October 14 until October 18, therefore, judges will listen to appeals in criminal cases emerging from the magistrates’ courts. The Service Week is a make-good initiative in place of the Judicial Marches launched in 2012 to bring the Judiciary closer to Kenyans. Sitting in twos over 808 cases and as single-judge benches in 720 cases in every High Court station in Kenya, the judges will hear and decide whether to uphold or overturn convictions in 1,528 cases. It means that on average, every judge will hear 15 cases this week — five as a member of a two-judge bench, and 10 alone.

On August 15, 2013, the chairman of the Community Service Order sent me a report showing that prisons were congested by over 94 per cent. Many Kenyans are aware that there have been complaints and hunger strikes in prisons here at Kamiti, as well as in Nakuru over delayed cases. I thank the prisoners who have lodged appeals for their patience and understanding as judges worked to conclude election petitions. Of the 33,194 inmates in prison, 12,704 of them are first-time light offenders who qualify for release under the Community Service Orders programme. Community Service Orders allow offenders to perform unpaid work for the benefit of the community as an alternative to imprisonment. This allows offenders to maintain family ties while serving their punishment under the supervision of probation and administration authorities.

During the Service Week, some 3,500 people who have been convicted for light criminal offences will have their jail terms revised so that they instead perform unpaid public work for the benefit of the community. Keeping petty offenders out of prison prevents their recruitment into serious crime, reduces prison population and saves the public money.

Often, attempts to decongest prisons are misunderstood by many Kenyans. Let me clear the air by saying that not every inmate qualifies for release. Judges will be especially careful to ensure that in releasing inmates under Community Service Orders, they take into consideration the feelings of the victims of the crimes for which the sentence was handed down. I appeal to fellow citizens not to be hostile to those leaving prison and instead show them leniency and compassion even as they continue to be under the watch of local leaders such as chiefs and village elders. Since feeding one prisoner is estimated to cost Sh175 a day, allowing 3,500 inmates to be home with their families will save the taxpayer Sh223.5 million in a year

Lastly, I wish to thank the Kenyan people for continuing to place their faith in the courts. In the year 2012/ 2013, some 54,602 cases were filed in the High Court, up from the previous year’s 37, 954. We are honoured by the authority that has been donated to us by the people of Kenya. This year, we will also focus on improving court registries so that they are not an obstacle to accessing justice. A prison study undertaken by the Judiciary early this year revealed that out of 3,008 prisoners who complained of case delays, nearly a third, or 900, did not know or have their appeal file numbers. We are streamlining registry processes to create clear accountability lines to reduce such incidents. I assure you of the Judiciary’s commitment under my watch to deliver on our constitutional obligations to deliver expeditious delivery of justice. An audit of all pending cases is under way to determine the exactitude of backlog and also to provide a basis for an information communication technology-based case management strategy.

Next week, I will be formally launching the Performance Management and Measurement Steering Committee, which I appointed this year to study and create benchmarks for service in the Judiciary. Our courts remain open and the early Judiciary Transformation continues.

Ladies and gentlemen, it is now my singular pleasure to launch the Judiciary Service Week.

Chief Justice and President of the Supreme Court of Kenya