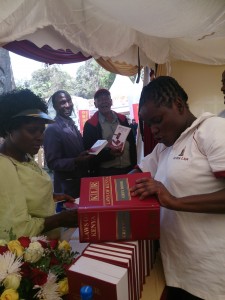 Kenya Law’s Evelyn Anyokori t (right) displays the new Laws of Kenya Grey book to members of the public during the Nairobi International Trade Fair held at the Jamuhuri grounds from 28th Sept to 4th Oct 2015.

Kenya Law joined over 500 local and international exhibitors at the 13th edition of the Nairobi International Trade Fair (NTIF) held at the Jamuhuri grounds from 28th September to 4th October 2015.

The public got a chance to learn more about the role of Kenya Law as the official Law Reporter in Kenya, the various aspects of law reporting, law revision and law compilation. On display were the Kenya Law Reports from 1976 to the year 2011, Election petition volumes, the Laws of Kenya Grey book -2014 edition, Kenya Law Specialized publications and the Kenya Law App.

Complimentary copies of the constitution were also offered to members of the Public who visited the exhibition booth.

NITF offers opportunities for regional, continental and global exhibitors to display and demonstrate their products. It also offers show visitors an opportunity to meet people from different countries and backgrounds, hence creating a platform for interaction and exchanging of ideas and experiences.

The 2014 Nairobi International Trade Fair was officially opened by His Excellency the President Uhuru Kenyatta and was themed ‘Enhancing Technology in Agriculture and Industry for Food Security and National Growth.’ 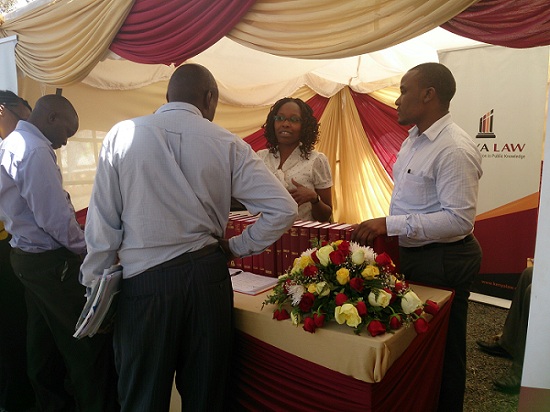